Humanism is a European philosophical, cultural and literary system of thought, which developed during the Renaissance (15th century to the end of the 16th century).

It changed the conceptions of the Human being and his relationship to the world, with a return to ancient texts as a model of life. It advanced the idea that a Human being is the principle actor in the world in which he or she lives.

It is an optimistic current of thought, unlike the traditional ideas of the Middle Ages, which proposed that a life of misery on this planet is only a passage towards a better (imaginary) world after death, where the economic rule of scarcity does not exist. Humanism is based on the idea that human beings can be happy if they learn how to organize their lives and actions properly.

The main values of humanism are: the intellectual, cultural and moral development of each human being, with respect and dignity for others; sharing, tolerance, equality and fraternity; the absence of superstitions; democracy, peace, freedom of thought; and a general access to knowledge and education for all.

In fact, a humanist is any person who endorses the great humanist values. 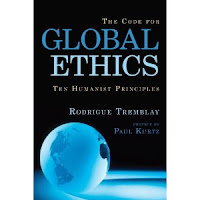 The Code for Global Ethics

Dr. TREMBLAY's QUOTES on the INTERNET